This homewall is a sweet many-angled woodie that admittedly needs more holds. Owner Peter Czoschke made sure the car still fit in the garage for winters at his home in Bloomington, MN. 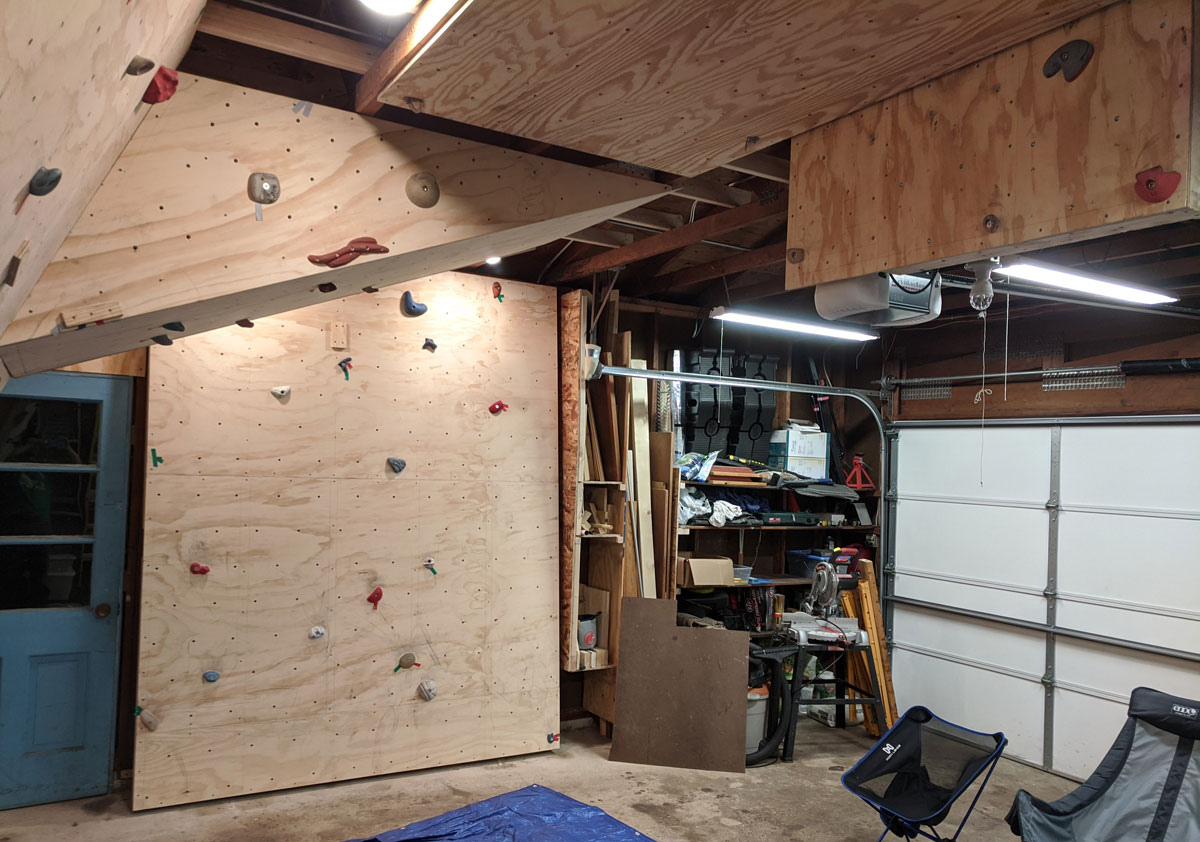 When did you build your wall?

April-May this year (it’s a Covid baby). I never considered a home wall as we have a top-notch gym down the road. Then the coronavirus shutdown happened and a friend offered to loan me a few of his holds. Next thing I knew I was drawing up plans to plaster
half my garage in plywood.

How long did it take you to build?

The basic structure was 1-2 weeks, full build was about a month. We still need to paint it, though.

Not including holds and padding, how much did it cost you to build?

About $700. Don’t underestimate the cost of fasteners. You go through a lot of screws and t-nuts! I estimate I spent $200 just on hardware, the rest being wood. The Metolius doc says to estimate about 2x the cost of the plywood, but I think 3x is probably closer.

Did anything in particular inspire your wall design?

I just wanted it to be fun. It’s also a training tool (2 climber kids in the family), but I mostly wanted it to be fun with features to set a wide variety of moves. I wanted a roof area because I have crap endurance on roofs. It also had to fit in the garage while allowing cars to still park in there (parking outside in MN winters is no bueno). 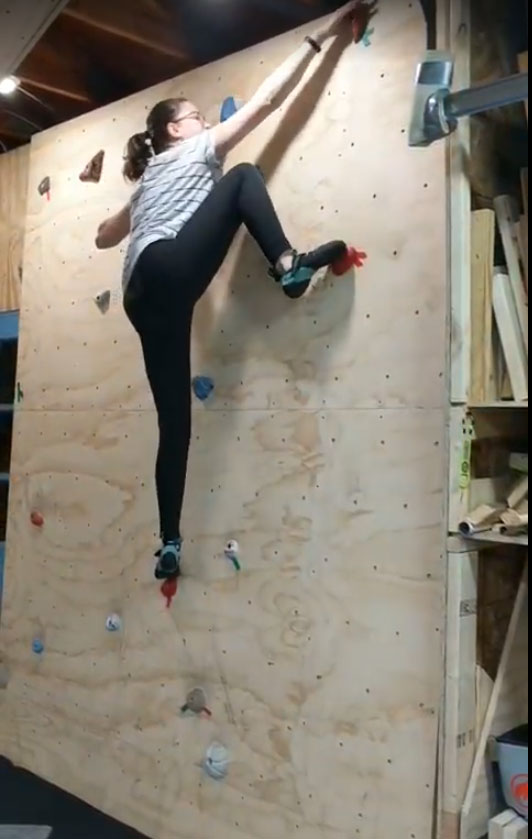 Padding. Climbing over a concrete slab (garage floor) is sketchyyy. Real padding is ridiculously expensive if you have to cover any substantial area. Plus, I want to be able to stow the padding when the cars are parked in the garage. I ended up with a mish-mash of
old mattresses (memory foam works way better than spring coils) and bouldering pads. A spotter is needed to shuffle pads around if you do a long route, but it works. No ER visits yet.

So far I don’t have any complaints or regrets. It turned out beautifully and has been a lot of fun. We’re expecting our first new batch of holds any day now. We’ve only been climbing on the borrowed holds, and have basically no jugs. Ouch! 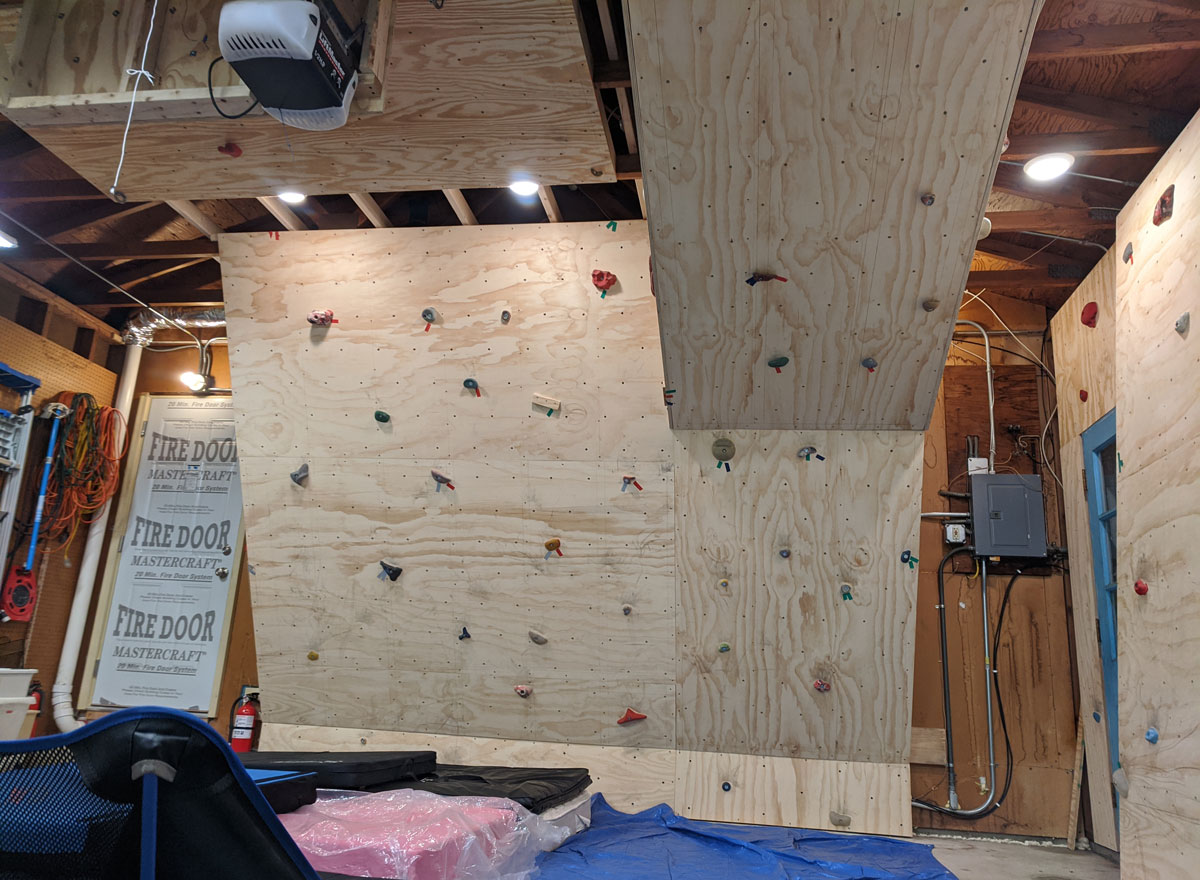 There was a side wall that clearly wasn’t going to work into the overhang but was cleared off. I was going to just slap a couple vertical plywood sheets onto the existing studs, but then at the last minute I decided to frame up a proper wall, mount it at the top with hinges, and make an adjustable slab. It’s actually way more fun than I expected it to be. It is a great addition to the burlier overhung sections. Now the kid crushers can thump away on the overhang and roof sections, while my old bones tiptoe up the slab. The roof area is pretty awesome, too, with a little “shield” for opposing foot holds to swing over to, although we only have one hold that will work on the roof for now.

Build a model first, either a physical mockup, or even better with a CAD program (Sketchup online is free and not too hard to learn). I found so many hiccups in my design ahead of time that would’ve thrown me for a loop in the construction process had I not built a model. You also can visualize it and tweak the design before you commit to anything. I probably went through 3 or 4 iterations before I started any actual construction. It’s also a lot of fun to drool over before it’s actually.