Home angle -single-angle Thunder Wall in Arlington, VA
back to all Homewalls 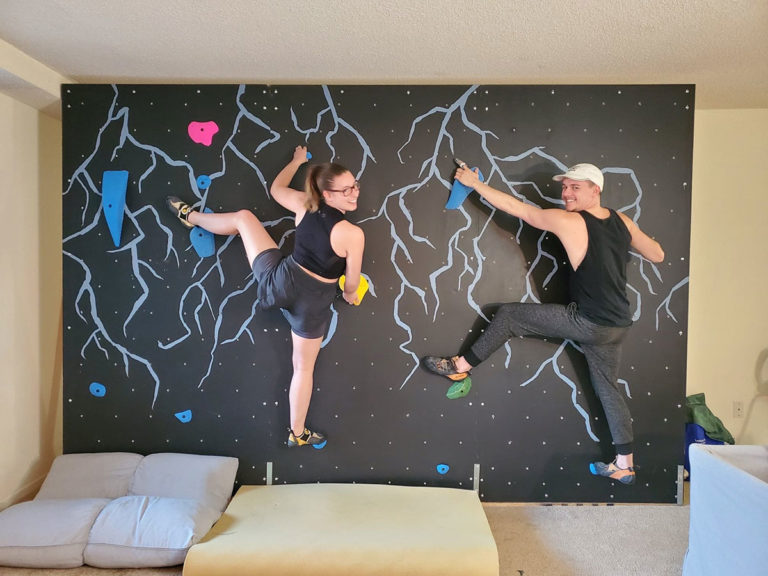 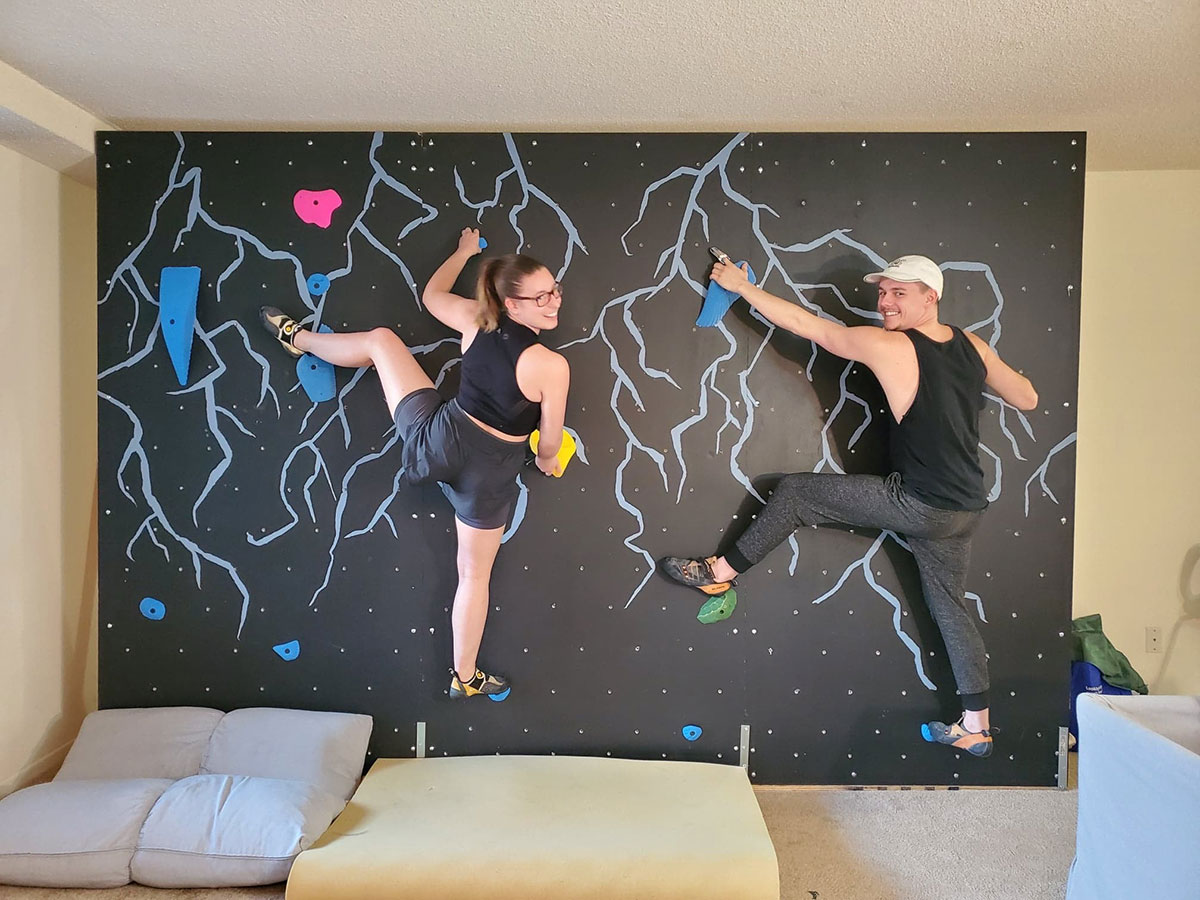 When did you build your wall? Was it a “COVID baby”?
Thunder Wall was absolutely the product of quarantining for Covid. I don’t think we would have really considered building it had it not been for wanting to continue climbing while staying isolated. We were about to move into a new place right as the quarantine hit and I sarcastically told my girlfriend, Kayla, that we were going to need to find space to build our home wall when we moved. Once we had moved in, that joke became a serious conversation and by May 21 Thunder Wall was born!

How long did it take you to build and what did that time look like?
The complete construction of our home wall from paper to route setting took us just under a month. Since Thunder Wall could not be anchored into the walls of our apartment, we wanted to take our time designing to make sure that we could build something structurally safe while minimizing the footprint in our living space. Week 1 was dedicated to designing and redesigning…and then redesigning our wall plans (big thanks to Kayla’s father). We got all of our wood and supplies in Week 2 and began painting the lightning bolts onto our plywood boards. We used chalk paint so we could easily tag routes. Week 3 was dedicated to building, emotional breakdowns, sleepless nights, and overwhelming joy when little things went right without a hitch. Because we work all day and live in an apartment, we had to confine our building time between the suggestive hours of “clocking out of work” and “not so late at night that our neighbors are getting annoyed”; this was usually from 5 pm-9 pm. By the end of Week 4, we had a few bolts left to tighten and were finally able to lift the wall of the ground and slide it into position.

Not including holds and padding, how much did it cost you to build? Any surprises there?
The wall, fully constructed, cost us about $800 to build with the majority of the cost being attributed to buying supplies (oh, the countless drill bits), the bolts/ braces, the paint, and the T-Nuts. It turns out wood is not nearly as expensive as we had imagined!

What are you doing for padding?
Originally, we had some really janky padding set up since we hadn’t even thought that far ahead of ourselves; it was crazy enough to think we were building our own wall! Currently, we use crashpads on top of our carpeted floor to fall safely and without giving our downstairs neighbors a scare.

What was your primary incentive for the wall? Did anything in particular inspire your wall design?
Covid definitely gave us the time and space to actually consider building our own home wall, but I think Kayla and I really just did it for us. We’ve just moved into our first apartment together and, I think, we wanted to build something that could really make it feel like our home. Neither one of us has any background in carpentry of any kind, and the thought of building a climbing wall from the ground up seemed like such an appealing challenge to us both. Kayla has loved art her whole life and was the one who came up with and designed the mural on the front of our wall. She felt that, if we were going to have a huge wooden structure in our living room, it may as well be an artistically beautiful, huge wooden structure!

What was the most difficult aspect of the design and build?
Aside from neither one of us having any carpentry knowledge?! I think the hardest part was putting all the pieces of the wall together. For the sake of being able to move it to any future home we have, we decided to not use any screws in our structure, rather we used carriage bolts. When broken down, our wall is really two parts; 3 pieces of 4×8 plywood across a support frame and 3 pieces of 4×2.5 plywood across a different support frame. Building these were “easy” enough, but putting them together was a nightmare! Theoretically, we could have drilled singular holes from one end of the base through the wall, but in reality, none of the home improvement stores we went to carry 10-inch drill bits. Using carriage bolts meant we had to pre-drill holes for the bolts to slide through so we had to line our two heavy frame pieces up perfectly, drill a straight hole through 7 inches of wood, and then hope the carriage bolt could slide through! Without a 10-inch drill bit, we had to drill two separate holes and pray they lined up. By far the worst part.

What would you do differently?
There are two things we look back and wish we had done differently. The first is not used chalk paint on the face of our wall. While it accomplishes what we were going for, it does make the holds stick to the wall when we try to move them which is not ideal. We’ve discovered that a small strip of duct tape on the backside of each hold is enough to keep it from sealing in place so it’s inconvenient but manageable. Using better tools would also top our list for things to do differently. As far as electric tools go, we had one power drill. All of our sawing and tightening were done by hand which was very time-consuming. If money weren’t as much of a factor, we would have loved to have used screw-in t-nuts rather than the standard hammer in ones to avoid any spinners.

Did you make any mistakes along the way or choose to re-do any aspects?
Oh, we absolutely did, but nothing too major! The biggest mistake made was actually by me. While outside on our balcony cutting the support beams for the backend of our wall, I accidentally took the term “Hand Saw” literally and cut into my index and middle finger on my left hand. One urgent care and 4 stitches later, we were back home and working. I don’t think we hit any point where we were forced to re-do, but there was a lot of adaptation to be done. For example, the most straightforward way to set t-nuts is to hammer them down; this is a problem in an apartment setting. So instead of hammering, we used one of our smaller footholds and its bolt to force the t-nut into the wood. With the plywood on its side, one of us would line the t-nut up with the hole. The other would be in front place the hold against the wall and begin to screw the bolt. The hold would act as an anchor to the bolt head, which would force the t-nut to dig into the wood. We would then unscrew and repeat…264 times…

What is your favorite aspect?
Aside from the mural that we created for the face of our wall, I think our favorite aspect is the versatility of our wall. We had a discussion about just using screw-on holds versus going through the work of adding individual t-nut so we could have variety. In the end, we decided to go with the t-nuts resulting in 264 possible hold locations! We figured that if we couldn’t have the height or an angle to our wall, we might as well have route options!

How often do you use the wall? Do you think you’ll still use it as much when the gyms fully open back up?
We use our home wall almost daily! With the two of us working from home mostly, it is the perfect way to break up any stressful workday tasks, or just to refresh your brain. When we feel ready to go back to our gym, I expect to use our wall just as much as we use it now, but with different intentions. I see us taking ideas from the routes set at our gym to set our own home routes. I also see us using our home wall as a means to practice moves and holds that we struggle on. Kayla and I HATE slopers so we expect a lot of those on our wall soon!

Any words of wisdom to aspiring homewallers?
It may seem like a sort of pipe-dream to think that you can build your home wall, but we both say that, if you are considering it, TAKE THE LEAP! Despite our lack of knowledge, it was one of the most fun experiences she and I have shared together. Ours was around $800 pre-holds, but it could have been easily cut down had we not painted, chosen to do screw-in holds instead of t-nuts, and cut down on the excessive amount of support bolts and braces we used (better safe than flattened, though). If you are going to use t-nuts, USE A SPADE TIP DRILL BIT! It saved our project from being a disaster.

Do you have any connection to climbing brands or gyms?
We climb at Earth Treks Crystal City. 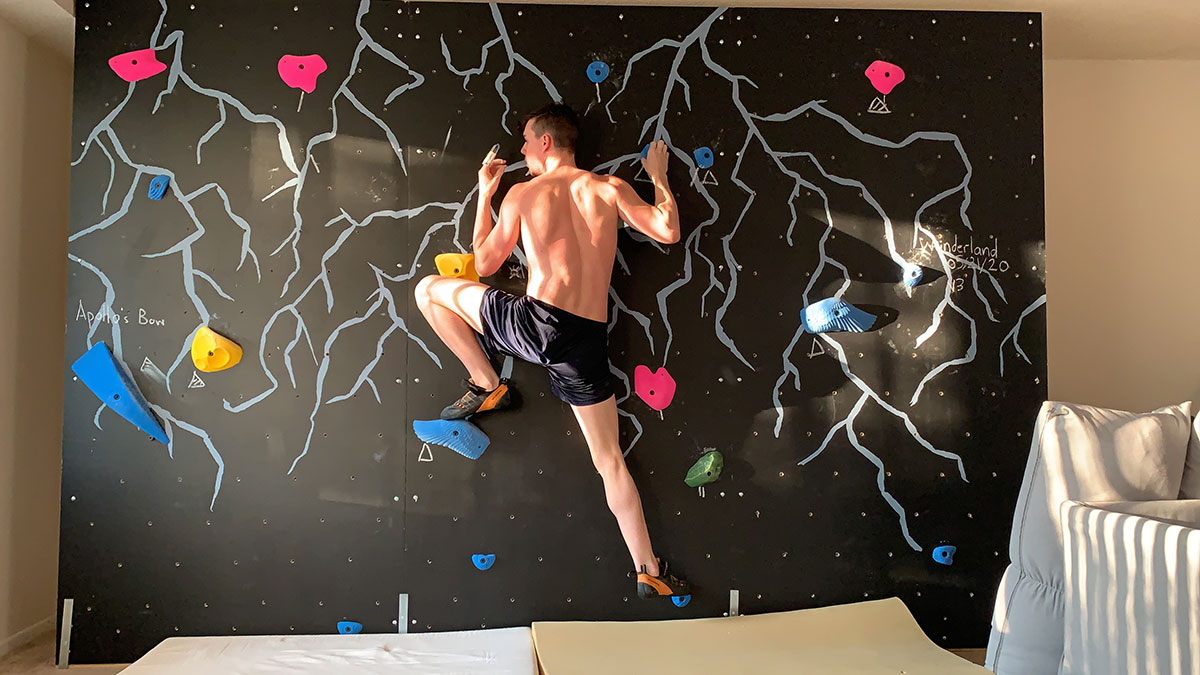 We created Homewaller to connect climbers passionate about climbing at home with great resources. Our team also runs the Climbing Business Journal.

Hangboard, Campusing, and Weighted Pullups BEFORE or AFTER Climbing? – From...

Because you don't need a garage or a backyard to h

Looking to break into the commercial gym industry?

Did you know bolt-on holds can easily double as sc

You can tell it’s Rocktober in this issue of the