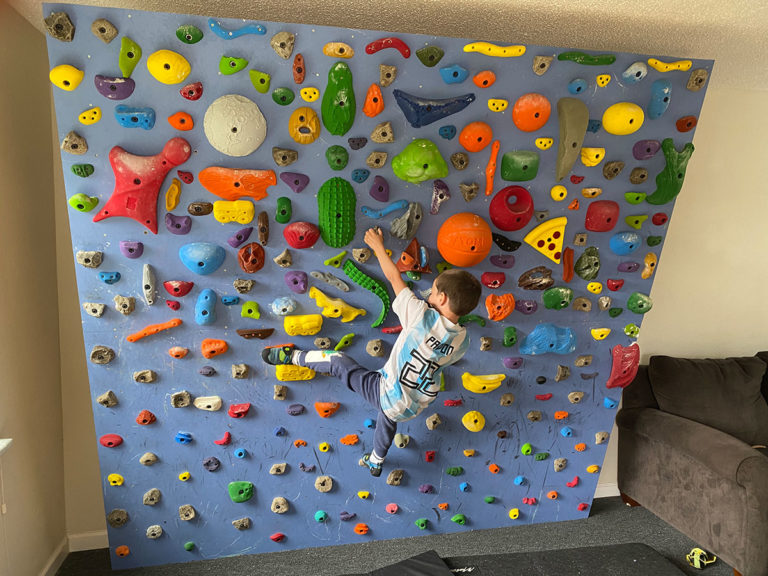 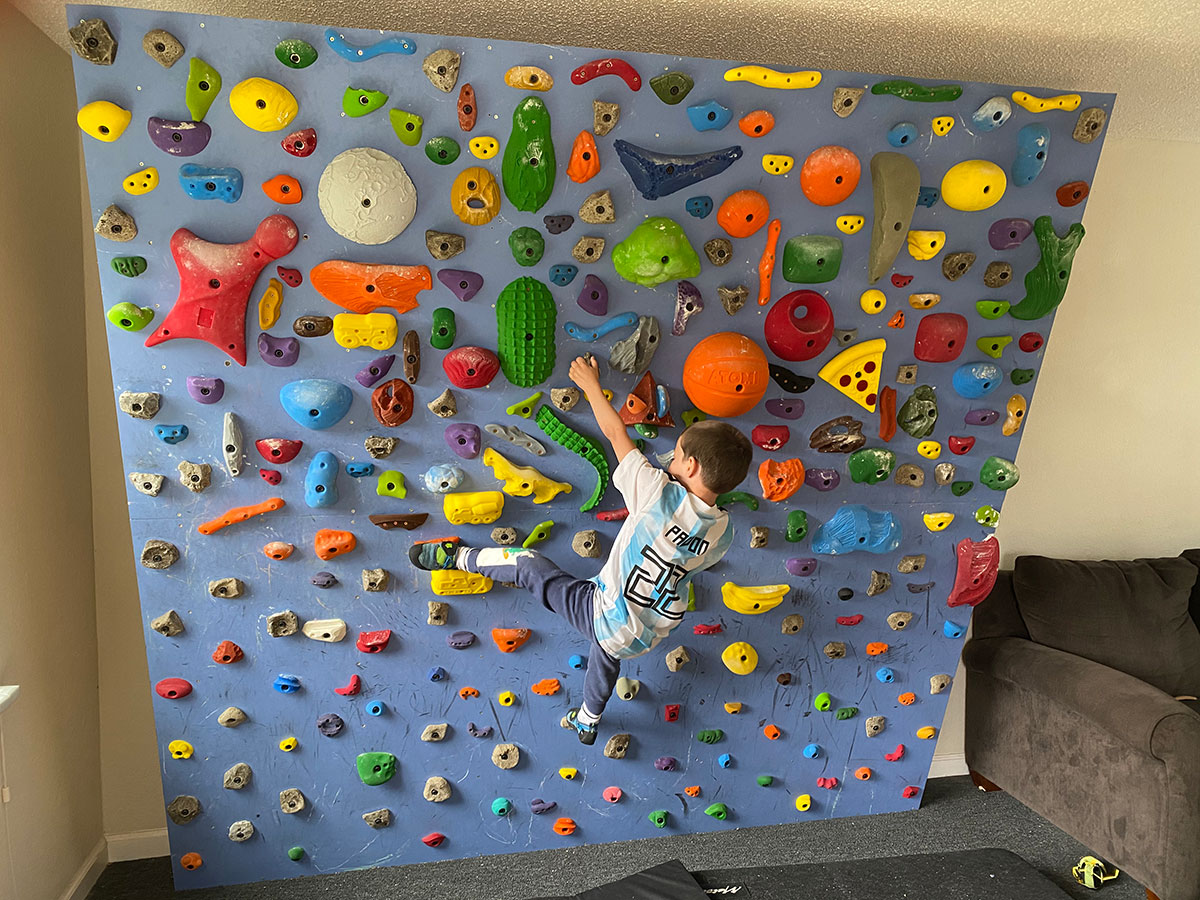 When did you build your wall? Was it a “COVID baby”?
We built it as a 6th birthday present for our twins, finishing in early February. One of them had got really into climbing since about November and it was problematic to take him to the climbing gym as much as he wanted (constantly). Initially the wall had few holds but once COVID started we started to add holds every couple weeks until it became what it is now. We weren’t really climbers before COVID but we’re starting to be now!

How long did it take you to build and what did that time look like?
3 weeks, mostly designing, painting the chalkboard paint, and construction. Did it entirely by myself in the evenings.

Not including holds and padding, how much did it cost you to build? Any surprises there?
Under $500. Took a while to find the right setup to make it adjustable angle.

What are you doing for padding?
Crash pads. Had to buy them from someone, as we just became aware of the sport a few months before starting construction!

What was your primary incentive for the wall? Did anything in particular inspire your wall design?
Growing boys. Our kids were 5, 5, and 3 when we started and I had never done a pull up in my life (now I can do them, thanks to the wall!). Adjustable angle was a huge factor because I thought it would let us make it more challenging to keep up with everyone’s improvement. Definitely a good decision.

What was the most difficult aspect of the design and build?
Design. Making it easy to build and safe enough to trust with our kids. It was pretty scary lifting it up for the first time and trusting our weight on it.

What would you do differently?
Given the space, nothing. Our climbing obsessed twin used it 3 hours a day since March, so no complaints here!

Did you make any mistakes along the way or choose to re-do any aspects?
I noticed critical nuts loosening from the vibrations from climbing and had to replace them with lock nuts. It’s been good ever since.

What is your favorite aspect?
Angle adjustment from 10-30 degrees and the hilarious kids holds from Atomik, like the basketball. The twin who loves climbing is also obsessed with the NBA and the basketball is his favorite hold.

How often do you use the wall? Do you think you’ll still use it as much when the gyms fully open back up?
My kids used it about 3 hours a day until just now, when we began a move to another house. I’m already planning the next wall..

Any words of wisdom to aspiring homewallers?
If it can tow a car, it can support a wall. Also, we liked the splash wall approach, just loads and loads of holds for infinite variety. My next wall will be a bit taller – we could only fit 8×8 last time and 12×12 or 10×10 would be better for adults. 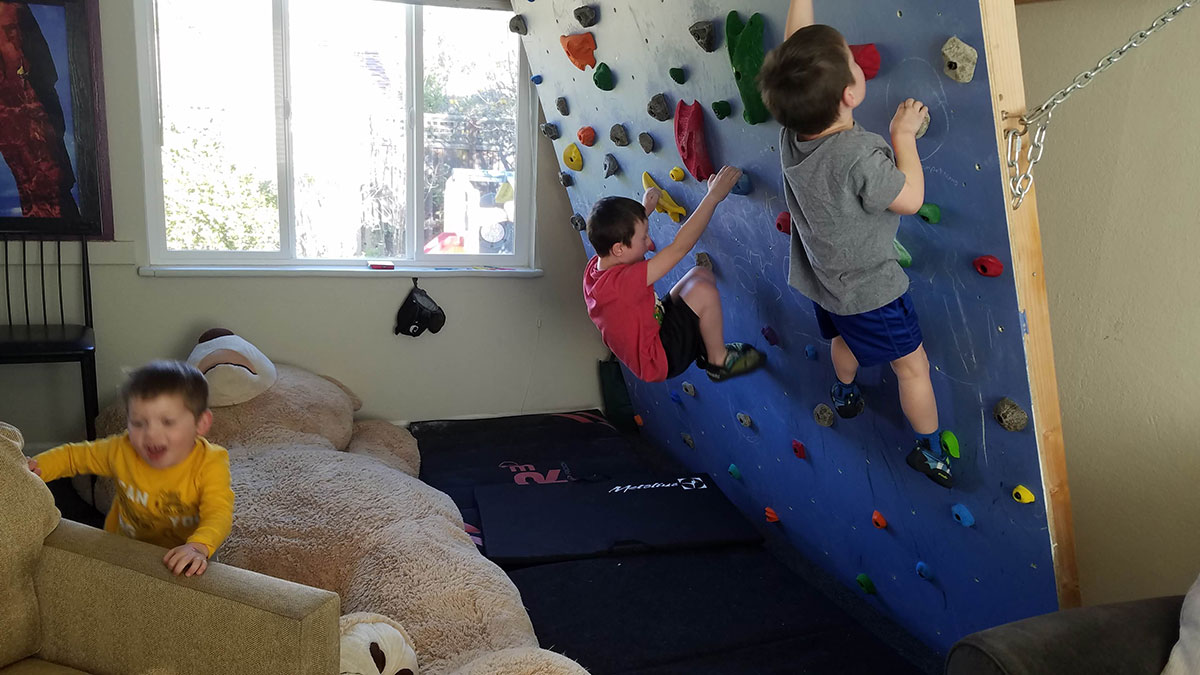 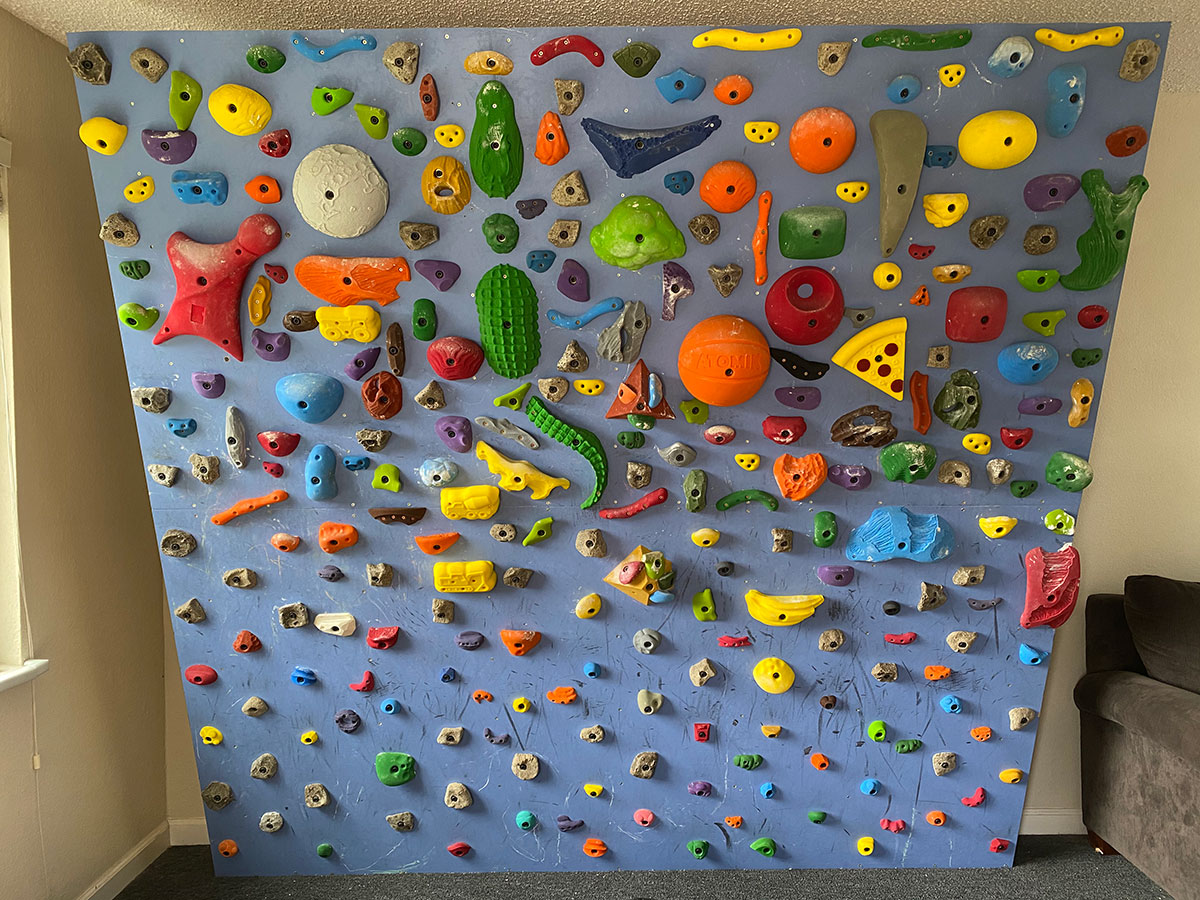