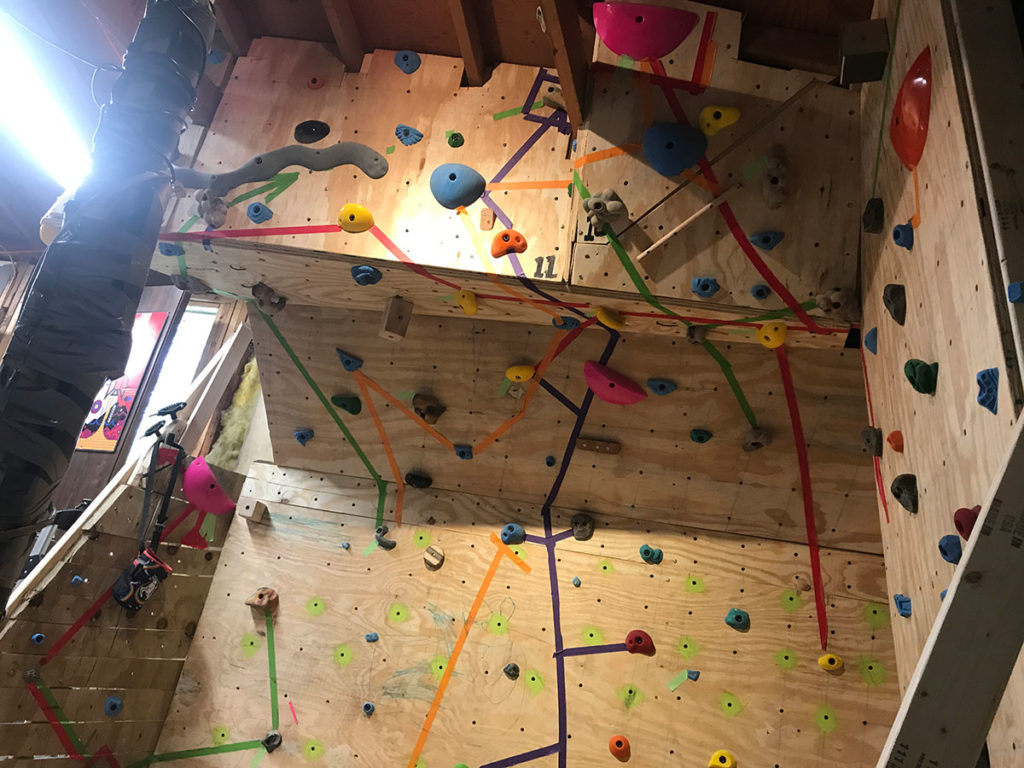 When did you build your wall?
The week after COVID struck and closed down MBP (Minneapolis Bouldering Project) my brother sent me a link to the plans he was using to build a two-panel lean-to style wall. I’d already bought a crash pad thinking I could stay in shape going to the crag once a week, but realized if my brother had a home wall, it was inevitable that he would quickly be better than me. And I couldn’t let that happen. So I got permission to build my own wall as long as I cleaned the garage first – so that delayed the project at least a week. I think I kicked off construction on April 7.

How long did it take you to build?
About a month, but with only two or three big “Days” of building, otherwise very, very late nights of putting up one section of frame, then another, then the plywood board by board. I wouldn’t start until after my kids and wife went to bed, and sometimes after Westworld or a Rick and Morty or something, so it might be 1 am before I even started. This is a terrible way to do construction. There were a couple nights where the birds were singing when I went to bed. There were also a couple weekend days where I got a LOT done by working during the day.

Not including holds and padding, how much did it cost you to build?
I call it my “Stimulus Wall” because that’s what I used to pay for it. The real cost is the SCREWS. There might be $200 worth of wood on that wall, MAYBE. But there is almost certainly $400 worth of screws. I think the wall itself, probably around $600 and I also bought a battery powered circular saw so I could move around with it. Made a huge difference. So call it $725 including the saw – NOT including the holds. Woof.

Did anything in particular inspire your wall design?
Had an existing shelf that I’d built to withstand the Ruskies pushing the button – (jk) – and by extending it out I realized I could make sort of a half cave. so that was the whole inspiration. The rest of the wall was built around the half cave idea. I had to build supports and anchor them to the concrete though because the garage is itself on the janky side.

What was the most difficult aspect of the design and build?
Getting the plywood to fit. I did a pretty good job of truing up the frame, but there are places where what you think is a triangle is actually more like the star trek insignia. And plywood doesn’t bend as much as you want it to. Well it bends a little if you get really good screws and apply them liberally. But in general if you need to make four plywood cuts, you end up making 8.

What would you do differently?
Steeper angle on the “vertical” panel at the end. Its a low celing so I just used an 8 foot panel and called it a day. I wish I’d propped it off the ground by about a foot and THEN started an 8 foot lie back. Would have been much steeper and harder that way. But its good like it is for the kids and when I’m tired I want to pull on and climb casually.

What is your favorite aspect?
The cave and the prow. Super-reinforced throughout, that prow hangs out almost 3 feet past the last support but it’s so ridiculously overbuilt I can dyno to the very tip and swing off it. But the cave is what it was built for, I love getting my feet above my head and upside down crawling from one side to the other. Heel hooks fall from the sky like manna.

Any words of wisdom to aspiring homewallers?
Holds are really expensive so start looking for deals right away, get a variety, and don’t wait to buy them. If you build the wall and then have to wait a week, two, four weeks for holds to arrive, you will be sad. I think there must be 10,000 home walls going up this past spring because holds companies up until recently were super over bought. Closing down completely or only taking orders for a short time each week. (Heck, you could not buy a 7/16ths drill bit in Minneapolis for love or money). So plan ahead on the holds and get whatever you can. You need way more feet (footholds) than you think. You need WAY more T-nuts than you think – for example, a single panel of uninterrupted plywood takes something like 150 Tnuts. I ran out and I bought 500. Screws will ruin you (make sure to use #9 or #10 (or bigger) for safety, and for sanity, use a star drive screw like GRK or SPAX – you will want to murder puppies if you subject yourself to drilling 1000 phillips head screws. Maybe treat yourself and get fancy grade plywood – Its like $20 more per panel but it is in no way where the big expense of the wall is. My wall took four panels of plywood. So for $80 more I could have smooth, consistent birch plywood up there. Finally, the pad. That final, hidden expense. First, you absolutely need one. The first thing I did when I finished my wall was climb up six feet and fall. Six feet straight down I just ‘sploded my forearm and didn’t really feel like climbing for like a week. So you NEED a pad. I’ll save you some time on research – toddler foam mattress. Its not what I’m using because I had some free materials I could scrounge, but if I was starting from scratch absolutely go with foam mattresses – and the toddler size is cheap, easy to arrange. You can get them for less than $50 new and if you get them off the floor with a layer of styrofoam or even wood slats, they shouldn’t rot and will provide by far the best value protection. The “Infant” side of a reversible toddler mattress is much firmer, also, put that side up. If you’re handy with a can of Lysol in these virulent times, an opportunistic wall builder could likely find toddler mattresses for free on craigslist or facebook. Most of all though, it is really rewarding to build one, watch it go from nothing to reality, and then use it daily. I spend a lot of time out in my garage, and having the wall always available, I pull on for a little bit just about every day and night. My hands are delightfully fatigued and swollen almost every day, my finger pads are staying nice and tough. I miss going way up and the big fun dynos they can set in the gym, but until that comes back your home project will keep you very happy and in good practice. I’m hoping to really crush once the gym opens back up.

Do you have any connection to climbing brands or gyms?
Just the ones I’m a member of or subscriber to Minneapolis Bouldering Project is an amazing community that I miss every day. And Escape Climbing – right on the edge of Northeast Minneapolis – is super accommodating, they don’t ship my holds they just let me pick them up – and the holds subscription is like a little christmas once a month. 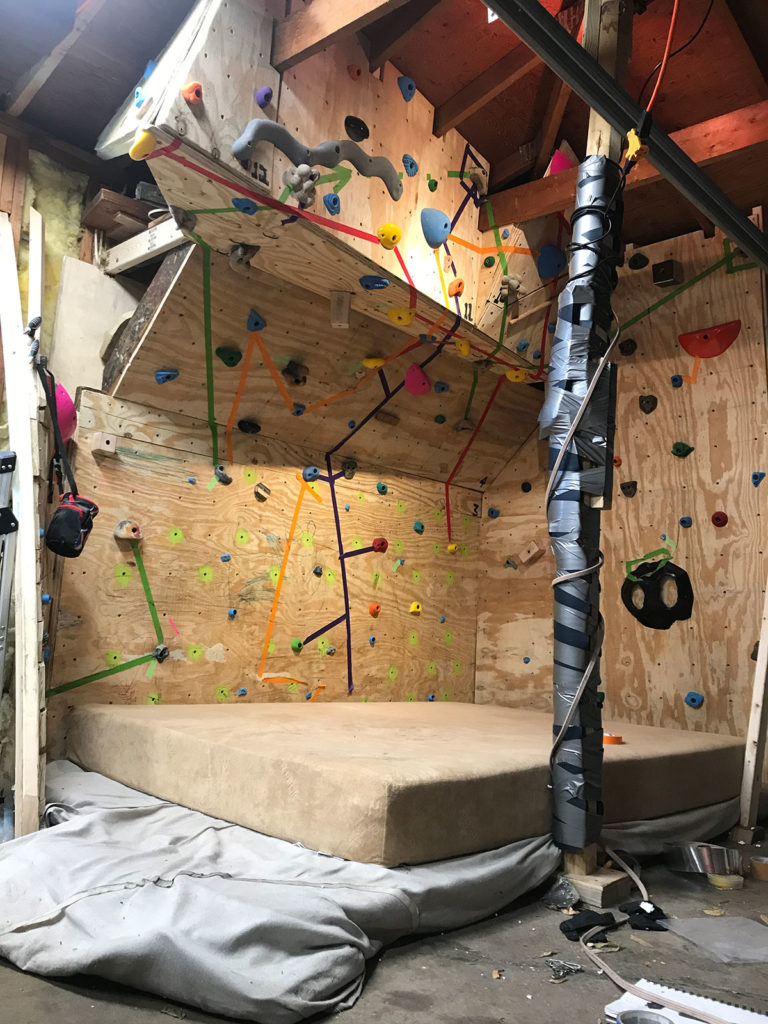 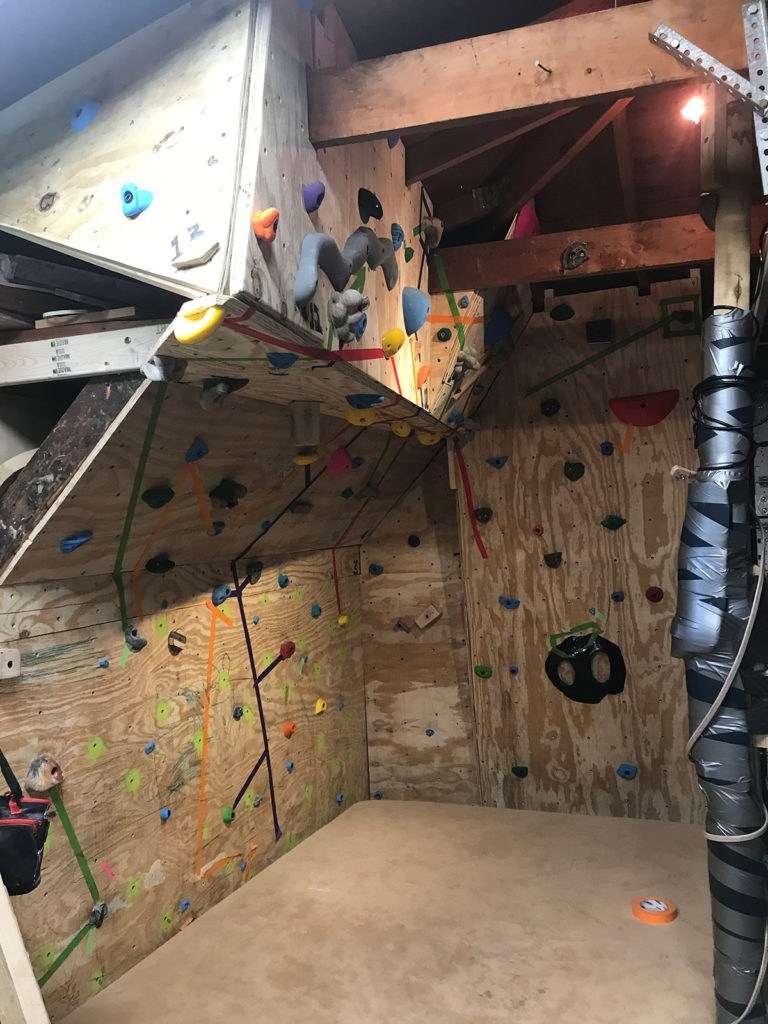